We Can’t Recall Logos We See Every Day

The research: UCLA professor Alan Castel and his colleagues asked more than 100 students to draw one of the most famous logos in the world from memory. Although many were Mac and iPhone users and most were reasonably confident they could accurately complete the task, only one person did. When participants were asked to pick the right logo from a lineup that included altered variations, fewer than half chose correctly.

The challenge: Is our visual memory really that terrible? How could it be so hard to remember something so simple? Professor Castel, defend your research.

Actually, there’s a lot of research proving we have a good memory for visual information. Studies show that people are surprisingly good at recognizing objects or complex pictures — such as other people’s vacation photos — that they’ve seen previously. But we’re also dealing with attentional saturation. It would be overwhelming and maladaptive to mentally record everything we see. So subconsciously we let some things fall away. The most famous experiment on this topic showed that few people can correctly recall the placement of the features on a penny — which way Lincoln is facing or where the word “liberty” goes. It’s a familiar object, yet we don’t focus on its details.

Other work has shown that the same is true for calculator keypads, computer keyboards, elevator buttons, and aspects of road signs. My colleagues Adam Blake and Meenely Nazarian and I thought that we might get different findings with the Apple logo. It’s also extremely familiar — nowadays maybe even more so than a penny — but it’s simpler. It’s designed to be aesthetically pleasing, and for many it’s a symbol of high value. But perhaps because it’s so ubiquitous and basic, our study subjects clearly hadn’t committed its details to memory. Only one got every part of the logo right, and just seven could draw it with three or fewer errors. And when we put the actual Apple logo in a lineup with seven altered versions, only 47% of people could identify it. We all know it looks like the fruit, but most of us don’t pay attention to the bite or the leaf. And that’s natural. We don’t burden ourselves with information we don’t think we’ll need to use.

So having a bad memory is a good thing?
Yes, forgetting where you parked last week or the name of a person you’ll never meet again is helpful because it frees your brain up for more important information. People who are good at selectively remembering can be very efficient; they can home in on what’s critical and forget the rest. People with excellent memories, by contrast, might struggle with interference; they might remember a trivial conversation but not where they left their car keys.

Are you saying memories are a zero-sum game? Once you have a certain amount, it’s one in, one out?
Not at all. Humans have a tremendous capacity to learn and remember vast amounts of information. I’m constantly surprised by the things I still know — lyrics to a song I liked 30 years ago, studies I was tested on in grad school. But we do have schemas for retaining higher-stakes information. In my lab we did another study on people’s ability to recall drug side effects when presented with a long list. We found that everyone was pretty good at remembering the severe ones — risk of stroke, for example — but not the minor ones, like swelling feet. Of course, swelling feet can be a sign of a blood clot. So we need to be careful about how much we filter out.

Why were so many of the people drawing the Apple logo so sure they could do it accurately?
We suspect they were influenced by what psychologists call the availability heuristic: “I’ve seen this many times, so I should remember it.” In our first experiment, 75 of the 85 subjects regularly used Apple products; in a second, 24 of 26 did. So they were understandably confident. Only after engaging in the task did they realize it was pretty demanding. If we’d asked them to accurately draw an eastern fence lizard, most would have said, “I can’t do that.” When, in another study, we asked people if they could recall the location of the fire extinguisher nearest their office, confidence was also fairly low. That’s what we call metacognition: knowing what you don’t know.

Before reading up on your research, I had no idea where my office fire extinguisher was. I asked my cube mates, and they didn’t either. But then a colleague pointed out that it’s within sight of our desks.
You’re not alone! My colleagues Michael Vendetti and Keith Holyoak and I decided to do this study after we attended a safety training and realized we didn’t know where our office fire extinguishers were. When Keith walked back to his office — which he’d occupied for more than 30 years — he discovered one inches from his door. We gave the same test to other people in the department, and only 13 of 54 got the location of the nearest extinguisher right. Just like the students with the logo, most of us were seeing these common objects but not noticing them. 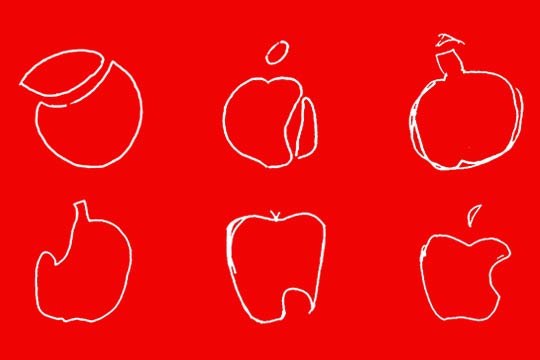 Study participants who were asked to draw the Apple logo came up with some interesting variations on the actual design.

But they’re big and red and could save our lives! Why would we ignore them?
Maybe because we don’t think we’ll ever have to put out a fire at work, so we filter the information out. In a follow-up study, we found that recall was much better for things we use or expect to use more regularly; 96% of people in our building could locate the nearest drinking fountain, for example. Another explanation is what psychologists call inattentional amnesia — where people are too preoccupied with other tasks to notice something else, as in the famous study where subjects counting basketball passes miss a man in a gorilla suit walking through the scene.

In the study on fire extinguishers we also found evidence that people didn’t recall the location of the one nearest to them because they thought they knew where it should be — a phenomenon called gist memory. Several remarked that it was probably near the elevator and were surprised it wasn’t. We saw the same kind of thinking in the logo experiments. Many students assumed that if they were drawing a leaf, they should also draw a stem. In my own mind, the bite had teeth marks because no real bite is smooth. So our memories are contaminated by all the knowledge we’ve accumulated. In fact, studies show that older people are more likely to recollect things based on gist. That doesn’t matter so much for logos or even extinguishers, but it could be a problem when the stakes are really high — say, in criminal, medical, and certain business settings. Sometimes the information on the periphery is what leads us to the greatest insights, so we might want to fight our tendency to filter, our inattention, and our gist memory.

What’s the best way to do that?
Failure is a good teacher. When we went back to the subjects in our study on fire extinguishers two months after the initial test, every person remembered where the one nearest their office was. I can draw an Apple logo perfectly now. More broadly, I think encouraging metacognition — a greater understanding of how our minds work — is helpful.

I hope people remember this interview.
Me too!